Hunting Trophy As Defined By CITES

It’s official!   CITES adopted a definition of hunting trophy.  And, it considers worked and manufactured items made from the hunted animal as part of the hunting trophy.  Here is the official language:

“The term ‘hunting trophy’ means a whole animal, or a readily recognizable part or derivative of an animal, specified on any accompanying CITES permit or certificate, that:

ii)       was legally obtained by the hunter through hunting for the hunter’s personal use; and

iii)     is being imported, exported or re-exported by or on behalf of the hunter, as part of the transfer from its country of origin, ultimately to the hunter's State of usual residence.”

Considering all the other very restrictive definitions that were proposed by various participants in the working group, most of which excluded worked items, we are pleased with the final definition.  Although the wording is very technical, it allows any parts or derivatives of an animal to be traded as a hunting trophy, as long as they appear on the proper paperwork and are verified by the exporting party to be a part of the entire trophy.  For the time being, the United States will keep its restriction that excludes worked and manufactured items from being considered a part of the trophy.  However, we believe that the United States will eventually replace their definition with the new CITES definition.

Internationally, hunters and governments will benefit from this definition.  They will be saved from confusion as to what constitutes a worked item and they will not have to provide several different permits for different items made from the hunted animal.  The hunter will now have one permit that verifies his trophy and we believe there will be fewer trophy seizures of as a result.  In addition, the taxidermy and crafting industries in Africa will be relieved of their concerns about losing business due to problems associated with trade in worked and manufactured items made from a hunted animal.

Posted by SCI-SCIF at CITES at 6:57 AM No comments:

In its last two days, the CITES meeting is wrapping up all of the 112 agenda items.  They first approved a budget for the next two years for the operation of the CITES Secretariat.  The world financial crisis has negatively affected all of the Party countries and the Secretariat.

SCIF announced its commitment to provide $25,000 per year for the next two years.  This money will be used for various projects that have been pre-approved by the Parties and are found in the Costed Programme of Work.  SCIF encouraged other non-government organizations (NGO) to do likewise.

SCIF has been the only NGO to make such contributions in recent years.  Many of the programs carried out by the Secretariat support the concepts of sustainable use and management of wildlife, including hunting, and the important conservation benefits that can occur because of that use.  There has been an increasing acceptance of sustainable use by the Parties, which has led to SCIF’s willingness to fund the Costed Programme of Work.

Once again, hunters have stepped up to support international wildlife management and conservation.

Posted by SCI-SCIF at CITES at 3:47 AM No comments:

In its next-to-last day, the CITEs meeting brought climate change into its future.  A decision , prompted by a  US request on the first day of the Conference, was adopted that says:  “Given the implications of climate change for science-based decision-making, the Animals and Plants Committees shall identify the scientific aspects of the provisions of the Convention … that are actually or likely to be affected by climate change, report their findings, and make recommendations for further action …”.

The U.S. proposal to list polar bears on Appendix I (endangered), which was defeated, was justified by the U.S. on the grounds that climate change would inevitably lead to the loss of polar bear habitat and thus commercial international trade in bear parts  needed to be banned to reduce the threats to the bear.  We should expect more proposals like this in the future now that CITES has embraced climate change as an issue.

Posted by SCI-SCIF at CITES at 3:46 AM No comments:

Back on the floor, the revised version of the definition of hunting trophy raised some eyebrows. For good reasons, the CITES Secretariat removed a word that caused some concern. It is amazing how the addition or deletion of a comma, preposition, or single word can change the meaning of a sentence.  In this case, there were no major changes in the meaning. A committee discussion opened on the wording of the definition, and the committee finally reached consensus on a definition.

Thus a definition of hunting trophy was approved by the Parties for the first time in the history of CITES.  SCI and SCIF are comfortable with the definition, which considers worked and manufactured items made from a hunted animal as part of the entire hunting trophy.  The United States was supportive of the definition, and although they will keep their restrictive definition, we hope that the US will soon replace their definition with the CITES definition.  We would post the definition today; however, there is still one last chance that the issue will be raised on the final days of the CITES Convention.  In the final days, all issues will be reviewed for final adoption by the Parties in a plenary session, and it is possible for debate to be reopened on contentious issues.  We will post the definition as soon as it has been adopted in plenary session.  Stay tuned.

Posted by SCI-SCIF at CITES at 5:19 AM No comments:

During the course of the day on March 22, the three elephant proposals were debated and voted upon.  There were two proposals by Tanzania (Proposal 4) and Zambia (Proposal 5) to downlist their elephant populations from Appendix I (endangered) to Appendix II (threatened) and to have one-off (one-time) sales of their ivory stocks.  The stocks have accumulated from naturally deceased elephants and elephants taken during problem animal control operations.

SCI assisted these two range states, at their requests, in reviewing and restructuring their proposals and in relaying comments on them between the CITES Parties.  We have a history of working closely with these countries, and others, on a variety of hunting and conservation issues.

The Tanzanian proposal failed after over two hours of debate, even though Tanzania had divided it into two parts and had asked the Parties to first consider a simple downlisting from Appendix I and then to consider a one-off ivory sale.  Tanzania did not get the necessary 2/3 vote for passage.  The vote was by secret ballot, which probably helped Tanzania get more votes than it might have in an open vote.

After the lunch break, Zambia presented its proposal.  Zambia made an effective presentation that included comments by a local community conservancy leader on the need for the Zambian elephants to provide benefits to the local people.  Zambia amended its proposal to remove the possibility of a one-off sale of ivory, asking instead for a simple downlisting of its elephant population to Appendix II.  After more than 1½ hours of debate, Zambia requested a secret ballot.  The vote again fell short of the necessary 2/3 majority.

Kenya then presented its proposal (Proposal 6) for a 20-year moratorium on ivory sales by all range states of the African elephant.  If approved, this would mean that no elephant range state could ask for a downlisting and a sale of ivory for 20 years from November, 2008.  Kenya introduced their proposal and later during the debate amended it so that the moratorium would only run for 6 more years from now.  That would have made the "universal" moratorium consistent with the agreement reached at the last CITES meeting (CoP 14) which applied a 9-year moratorium to the 4 countries which got a downlisting to Appendix II and were allowed to sell their ivory stockpiles – Botswana, Namibia, Zimbabwe and South Africa.  This also failed to get a 2/3 majority, whereupon Kenya withdrew its original paper and the elephant debate came to an end.

The elephant proposals are now over, for this meeting, unless one of the proponents makes a move to re-open debate on their proposal in the last two days of the meetings when in what is called Plenary Session.  That would first requires a procedural vote in which 1/3 of the Parties would agree to re-open the debate, and then the proponent would still need to get a 2/3 majority on its proposal.  We do not know if any of the proponents will attempt this.

This morning, SCI/SCIF created a bridge between the South African Development Community and the Latin American delegations attending the CITES convention. This is the first time that these delegations were able to meet in one room and exchange information on the different proposals being presented to the CITES Parties. Thanks to the efforts of George Pangeti and J.Thomas Saldias, the African and Latin American members of our delegation.

Honorable Catherine Namugala, Minister of Environment and Tourism, Mrs. Catherine Eva, Chief of Chiawa Community in the Zambezi Valley from Zambia, and Mr. Erasmus Tarimo, Director of Wildlife of Tanzania as well as the Ambassador of Tanzania were present among other delegates. The Latin American regional group meeting is comprised of 25 countries of this region; the SADC group is comprised of 15 African countries. 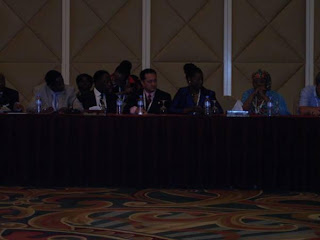 Posted by SCI-SCIF at CITES at 3:17 AM No comments:

We scored a major victory for hunters today, but the issue is not fully over.  The issue is the creation of a CITES definition of hunting trophy.   The victory is that the definition now includes worked items made from the animals taken by the hunter, such as elephant-foot stools, hair bracelets, and boots, and can be exported without a second export permit as long as the items made from the animal are “specified” on the hunting trophy’s exporting documents.

As previously mentioned, SCI and SCIF have played a constructive role in a drafting group assigned to form a definition of hunting trophy.  After four long sessions of the drafting group, or 6 grueling hours arguing our positions, SCIF’s Matt Eckert and SCI head of delegation John Monson were pleased to see an agreeable compromise definition that was up for adoption today, on the floor.

SCI delegation chairman John Monson made two statements on the floor on behalf of hunters.  In the first statement, he supported the draft definition in general terms.  In the second statement, he supported a suggestion from the United States that improved the document by making it clear the definition applied tore-exported trophies as well as the initial import.  So if an animal is hunted in one country, shipped to a second country for taxidermy, and then shipped to the hunter’s home, the shipment would still be considered a hunting trophy, even if worked items were included in the shipment.

For the past few years, this has all been a problem for safari hunters who live in the U.S..  Two  years ago, the U.S. published rules that eliminated worked items from the definition of a hunting trophy and required a second export permit for items made from the animal.  At this meeting, the U.S. tried to have their restrictive definition adopted as the global definition. This is exactly what SCI anticipated from the U.S., and we came to this meeting prepared to prevent its adoption.   Our preparations paid off with the inclusion of raw, processed and manufactured items in the definition.   Incidentally, this may open the door to asking the U.S. to revise its definition in the U.S. rules.

The final text has not been approved yet, because it needs some drafting work.  It will be back on the floor tomorrow.

In order to reach agreement, the countries specified that the animal parts (whether in the form of manufactured items or not) had to be identifiable to one of the animals taken by the hunter and also had to be listed specifically on the face of the export permit.  While that’s not final yet, that’s the likely result.

Posted by SCI-SCIF at CITES at 6:33 AM No comments: